Avast freezes your computer during setup, scanning or update? Computer keeps hanging during startup when Avast is launching? Here’s how I fix mine.

What happened to me was that my computer freezes every time during Avast antivirus setup installation, specifically when the installation bar was in around the middle, where my mouse cursor was constantly in the loading state and nothing would respond no matter what I clicked on, til a point where I couldn’t even bring up the task manager. First I thought it’s some sorts of process that could take awhile to complete, but after waiting for more than 2 hours, I was sure something was wrong. So I went on to look for a solution and below are what I’ve done to fix the problem.

These solutions not only applicable to when your PC freezes during Avast installation, they also applies to problems where Avast causes your PC to hang when you launch it, during startup, whenever you start scanning for viruses or during any other situation when Avast is suspected to be the cause.

By clean reinstalling, I mean a full and complete uninstallation that most of the time can’t be done via the Windows default add or remove program feature. We will have to do it manually.

Software issue, files corrupted, registry issue are the common causes when Avast freezes your computer when it runs. The first thing you should do is reinstall Avast manually using the Avast uninstall utility. Here’s how: 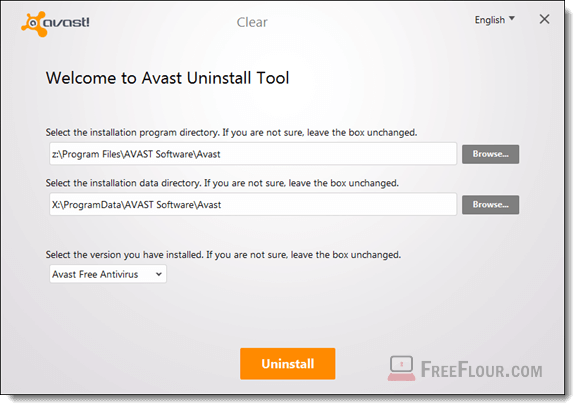 Tip: If you have trouble going into Windows due to your desktop being completely blank or black screen while your mouse cursor can still be seen, here’s how you bring back your desktop icons and stuffs so you can do the re-installing:

If this doesn’t solve the freezing issue, move on to the next solution.

Conflict between Avast and other protection software

It has been continually reported that protection software such as Microsoft Security Essential, AVG, Avira Antivirus, ZoneAlarm, K9 Web Protection and many others cause issues such as computer freezes, PC automatically restarts followed by Windows black screen (with no icons) and freezes, or protection services fail to run, when it’s running together with Avast Antivirus.

If you have other antivirus, anti-malware, spyware or other kind of protection software currently running along with Avast antivirus, try to remove it temporary to see if Avast freezing problem can be solved.

Although Windows Defender should have already been automatically disabled by default if you have an active antivirus software installed, if it didn’t, disable Windows defender now as it would also be conflicting with Avast.

Also make sure that your Avast program and definition is up to date. Check and update Avast antivirus program and its virus definition to the latest version.